“I don’t know what it feels like to be happy; I’ve never had happiness. My husband left us when Mari was just six. Every day I go to the cardamom fields and Mari goes to the garage. That is our routine and may be it will remain the same till we die,” said Kanmani in an agonised voice as she spoke in hushed tones and added, “Sometimes, when I don’t have any work, I stay at home. It is quite rare that both of us get to spend some time with each other. Occasionally, the owner of the workshop calls Mari on Sundays to work on a car that has just been brought in for repair. He dutifully obeys his employer and tries to get everything done on his own. We are always running in different directions to earn some money. We don’t find the time to stop and enjoy life or even share a moment with each other. Mari always gives me whatever he earns, and if he ever wants to buy anything for himself, he seeks my permission to do so. He doesn’t have any bad habits unlike other kids. He doesn’t spend money buying unnecessary things.”

There was a hint of pride in her voice. Unlike all the men in her family, her son was different. He was her saviour and she was his divine spirit. There was no room for dreaded despair between them for they’d relinquished their sorrows a long time ago. No longer could they differentiate between angst and reality. This was life. And, that’s all they knew; that’s all they ever had. Held by the wisps of a bond so resolute, at every dawn as the morning sun broke through the clouds, the mother and her child strengthened their resolve to survive, thrive and exist with honour.

“The job at the cardamom fields is all I have. And, this runs for six to seven months a year. I have nothing else to do after that. Every time the season ends, I am concerned about our future. I worry if we will have enough to feed the little ones. My mother, Angaleshwari, still does construction work to support our family. At this age, she lifts bricks and carries containers of mud on her head just so that her children and grandchildren don’t go to bed on empty stomachs. We couldn’t do much for her and yet she sacrificed everything for us. My life is pretty much over. It passed before my eyes and I have no regrets whatsoever. My children are good human beings and I only wish well for them. I hope they take care of me when I grow old and weak. Sometimes, I feel like I don’t have the strength to struggle anymore. The only thing that’s keeping me alive is the hope that some day my children will prosper in their lives,” said Kanmani as her voice broke into a sob.

She told us that everyday as Mari leaves for work, she advises him to be calm and patient. Even if some one loses their temper at the garage, she tells him to treat them with kindness. They cannot afford to lose a job in this household. If money wasn’t an issue, she would have taken care of him all by herself. She would have ensured that he got a decent education. “I don’t need anything, neither money nor property. My joy begins and ends with my children. I always try to share what life has taught me with my kids. Mari is quite knowledgeable and he understands everything but my younger one is a bit immature,” explained Kanmani. 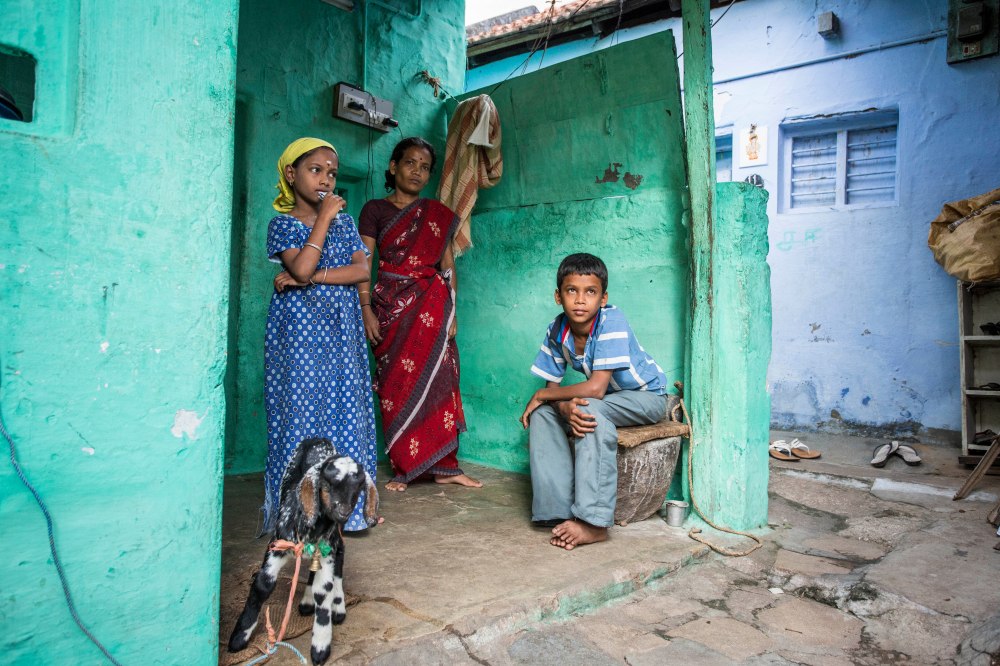 We saw Mari fiddling with the collar of his shirt as he struggled to keep the goat in one place. He soon burst into a fit of giggles. At heart, he was still a young boy. We asked him why he decided to leave school so early in his life. Was it the love for his automobiles or was it to lend a helping hand to his mother? In a firm tone, he replied, “It was for my mother. She could use the extra hand. Besides, even if I had money, I wouldn’t want to go to school. I don’t like studying. I love cars and I’d want to better my skills at handling automobiles.”

He also showed slight interest in learning English. Despite harsh circumstances forcing him to become the self-made individual he is today, we noticed that Mari was never ashamed of who he was. He only strived to grow stronger as a mechanic and evolve into a better human being. Today, Khaja has become his teacher, mentor and a father-figure to him. He treats him like his own son and sincerely hopes he excels in whatever he does.

We once asked Mari if he had any friends and if he missed having someone to play with. He had a befuddled expression on his face as he replied, “No. I don’t have any friends. I have a lot of work to do. Where is the time to play?”Deprived of a normal childhood, the garage had perhaps become his playground where he could use his tools to embark on an adventure with the engine and wheels; to escape reality for a few moments where he didn’t have anything or anyone to be worried about but himself. We wondered if he ever spoke to them, his inanimate friends, share his joy and grief with them while he brought them to life with his bare hands.

Mari’s mother and grandmother kept insisting that we have some tea or coffee. They handed over a 100 rupee note to Mari and asked him to buy some milk and snacks for us. He held the note in the palm of his hand and squeezed it tightly. We couldn’t bring ourselves to accept their offer. For, in our hearts, we knew that Rs 100 meant another day in the garage for Mari. We didn’t want to burden a family struggling on a shoe-string budget anymore. We tried to convey to them repeatedly that they could continue doing their daily chores and not worry about attending to us. However, they constantly fussed about making us feel comfortable and decided not to do any work at all.

We quickly glanced around the house to catch a glimpse of their life. It had one room and the corners provided the residents the privacy they required. On one side, there were kitchen utensils stacked up neatly in a pile and on the other, a tiny television set occupied a cosy spot on top. In the far corner of the room, a place was reserved for the Gods who they hoped haven’t forgotten their existence. Arm in arm, they still wait for the day when their prayers would be answered, when they could finally feel unimaginable joy.

As we bid our farewell to the family, our eyes chanced upon an old framed photograph of Mari’s mother and father, from a time when they were newly-weds, hanging on the wall like an ominous reminder of what could have been if their destiny had chosen a different path. To their children, it was nothing more than a frame that captured one parent who left them with reckless abandon, and another who cherished them lovingly.

With unspoken promises of returning, we left towards our home all the while hoping that Kanmani, Mari and his grandmother earned enough today to keep their stoves lit at night…

Project ‘Rest of My family‘  is an attempt to connect back, re-discover our relationship with and understand our responsibility towards the larger family that we are a part of — the rest of our human family. Hence, it is titled Rest Of My Family.

Through ‪#‎RestofMyFamily‬, we will focus on highlighting social issues and human interest stories, documenting the triumphs of the ordinary man despite all the hardships they face constantly, and help these stories reach a larger audience and wherever necessary extend support to the individuals and communities that we write about. We hope to make a direct impact to the lives of those people we meet and find suffering due to various social issues; to connect the ones who need help to the ones who can help….

The whole of humanity is one big family but somehow, over time, we have lost that connection with one another. Our struggle for individual survival has taught us to draw a circle of 'me and my' around us and we consider only certain people, places and things as our own. By the very design of this paradigm, the rest of the people, places and things in this world fall outside this circle of love and compassion. And, in this societal race of securing more resources for ourselves and our loved ones, most of us have forgotten our relationship with one another at large. There are some of us that have fallen out of everybody's circle of 'my' or have been left too far behind in the race to survive. This project is an attempt to connect back, re-discover our relationship with and understand our responsibility towards the larger family that we are a part of -- the rest of our human family. Hence, it is titled 'Rest of My Family'. Through this journey, we will focus on highlighting the social issues and human interest stories, documenting the triumphs of the ordinary man despite all the hardships they face constantly, and help these stories reach a larger audience and wherever necessary raise funds through fund raisers and crowd funding campaigns to extend necessary support to the individuals and communities that we write about. We hope to connect the ones who need help to the ones who can help. We follow up our documentation by extending necessary support to the individuals and communities we document about. So if you wish to reach out to anyone through us then feel free to get in touch with us at anytime. facebook.com/RestOfMyFamily twitter.com/RestOfMyFamily instagram.com/restofmyfamily restofmyfamily@gmail.com
Loading Comments...
%d bloggers like this: